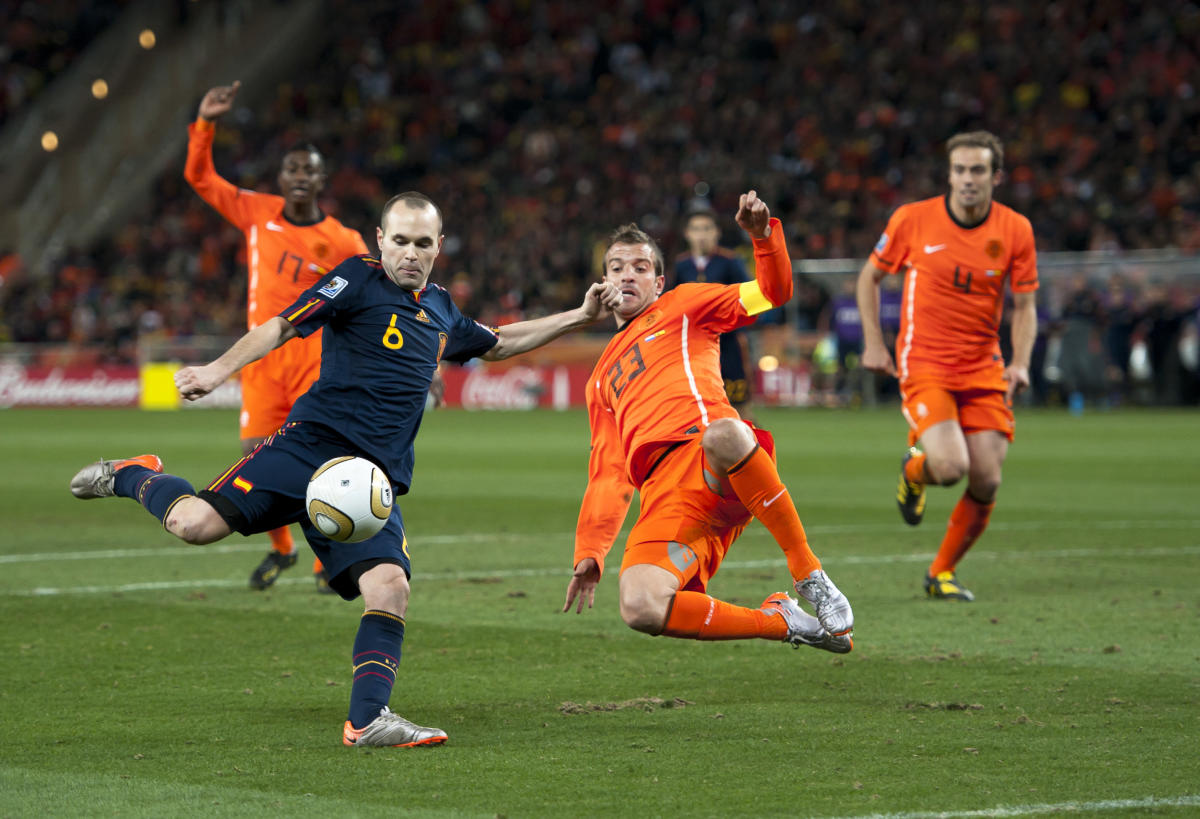 It is fairly easy to have a look on Wikipedia to get a quick understanding of the top of the Spanish football pyramid. This article aims to explain some of the recent changes, delve a bit deeper into the differences at regional level and draw a brief comparison with the English football pyramid at lower levels. This is essential for anyone wishing to get involved in Spanish football or hopefully just interesting to anyone that works in football.

In Spain, as in England, the names of football divisions can be somewhat confusing because of the long history and evolution of the football pyramid. It was not invented overnight, but has been developed over the course of a century, with disputes between clubs, leagues and other stakeholders causing fractures in tiers and separations of responsibilities. The Spanish league survived through the Spanish Civil War from 1936 to 1939 and of course the Second World War, in which Spain remained neutral (sort of).

It should also be recognised that Spain is split into autonomous regions, partially due to all that happened during that civil war. These autonomous regions act similarly to the separate countries that make up the United Kingdom or the states that make up the USA. They have their own elected governments, their own tax systems, separate health systems and when it comes to football, they have separate administrations that run their own leagues and coach education systems.

The Spanish National League did not exist until 1929, in fact the Copa Del Rey was the first national competition in Spain beginning in 1903. Whilst most people can point out Spain on a map, its size is often underestimated – at over 500, 000 square kilometres, it is more than double the size of the UK and almost four times the size of England. In the context of the early 20th Century, it is easy to understand why the creation of a nationwide league system took some time.

Even with today´s modern infrastructure, when Elche play Villarreal (two teams from the Valencia region) the drive takes more than three hours and if Elche were to drive to play Celta Vigo, it would take them ten hours or more. The Spanish national league also includes several teams from the Spanish Islands including Mallorca, Ibiza and Tenerife. In England, the maximum driving time to an away match is about 4-5 hours, whereas in Spain you often need flights and a hotel.

It is most likely this geography that has forced the Spanish football pyramid to stay reasonably flat when compared to England and why Spain spreads into regional football fairly quickly.

Below shows the top of the Spanish league system as of the season 2021/22:

As the table shows, the top two divisions run by the “La Liga” franchise in a similar way to the Premier League in England. There are then three tiers controlled by the Spanish Football Association (RFEF). As you can see, none of the RFEF divisions are whole nation groupings. Primera RFEF and Segunda RFEF are divided into groups by geography and Tercera RFEF is divided with one group for each of the regions of Spain (there are two groups in Andalusia due to its large size and population).

Until last season the RFEF divisions did not exist in this format. After the top two divisions, the next division down was called Segunda B (split into 4 geographical groups) and then the same Tercera format that exists now, split into its regions. However, the decision was made by the Spanish FA to create an extra tier, with Primera RFEF and Segunda RFEF replacing Segunda B.

Not only do the names now make more sense, but it was also because the gap between teams promoted from Tercera and teams coming down from the second division was far too big in the old Segunda B – teams such as Elche, Hercules or Deportivo La Coruña were playing village teams on a regular basis. It was also too big a gap financially for any Tercera teams to make the jump to Segunda B, and likewise, teams coming down from Segunda were often ruined financially by the large drop in TV money (Segunda B received zero TV money).

Once we look below Segunda RFEF, you can see that Tercera RFEF is split into regional leagues. There a large differences in terms of geographical size, population size and economic power between regions in Spain and so logically, the can be a difference in ability and professionalism in each of the Tercera groups.

For this article we will have a look at the difference between the Murcia region and the Valencia region as a comparison.

Because of these differences, it is clear that the talent and buying power in the Valencia region will be much higher than in Murcia.

These regional differences become even greater once we look beyond Tercera RFEF and into the part of the football pyramid that is controlled by each regional FA. There are three tiers of what we would call ‘fútbol federado’, that is, football which is organised and regulated by the federation and directly connected via promotion to the RFEF tiers above. Each player must be properly signed, registered and licensed and all referees and coaches must be qualified to a certain level (minimum UEFA B or higher for coaches, depending on the tier).

Let´s have a look at Valencia and Murcia again for a comparison:

Teams at the top of their Preferente groups qualify for the Region´s Tercera division and some will enter playoffs. Teams at the bottom of Segunda Regional cannot be relegated, they remain at that level indefinitely as long as they re-register for the following season. There are far more teams in the Valencia region mainly due to the population size difference, however, it is hard to compare the ability of teams across regions once we get down to this level. In fact there are even large differences within league groupings. It is a regular occurrence for clubs to start up from nothing in Segunda Regional with grand plans for various promotions. This is often signalled by offering financial incentives for players in a league which is generally amateur and these clubs often go unbeaten across the entire season.

There are also sometimes arrangements whereby an outsider will buy out the ‘owners` of a club in Primera Regional, Preferente or Tercera RFEF and are then allowed to change the name, thus essentially buying their way into a higher tier straight away. The legalities of this however are complicated and we will be writing a piece about this at a later date.

Let´s briefly compare the Spanish pyramid at regional level with the same level in England.

In England, beyond League Two is what would be considered ‘non-league’ or what is officially part of ‘The National League’ system. The fifth tier is still one nationwide group and even the sixth tier is only split into two regional groups (North and South). Below that in England, whilst the system has been organised slightly more in the last decade and standards are improving, the large majority of people in England have no idea of league hierarchy at this level and are confused by nomenclature. In Spain, the structure is clear and progression and pathways are obvious.

Spanish reserve teams also play in the same league system as their first teams. The Valencian Tercera division this season includes Valencia Mestalla (Valencia´s B team), CD Roda (Villarreal´s B team), Villarreal C and Ilicitano (Elche´s B team) amongst others. Therefore players hoping to attract the attention of bigger clubs could play for Villajoyosa, Orihuela or Athletic Torrellano in Tercera and be spotted by staff of Elche B or Hercules B who are competing in the same league, same location and play at the same standard facilities.

This is advantageous compared to the ‘Premier League 2’ system currently running in England, which is a weird hybrid under-23s and reserves league run completely separately from English football.

In Spain, there is not a huge gap for players to overcome when moving upwards or when being dropped from the likes of Valencia, Elche or Villarreal. They do not need to decide, as in England, between staying in the reserves of an ‘elite’ club or playing “real football” in the English Football League.

When we look at ‘National League’ level in England, the drop off is fairly drastic in terms playing facilities and also the regard within which football is held. Many teams struggle to find pitches for training in the winter or maintain their own playing surface.

In Spain, all pitches at all levels, for both training and matches are obtained for free through the local council. There is a set number of days for training per team, depending on age and division of competition. For example, Segunda and Primera Regional teams will train two nights per week, whilst Preferente teams will be allocated three training pitches per week.

In my opinion, the flatness of the pyramid in Spain means that the pathways for players, coaches and even clubs in Spain are transparent and more achievable than in England. The same can be said about the way youth football operates in Spain compared to in England, but that is also a whole different topic in itself which we will hopefully be writing about soon.

If you would like to learn more about Spanish football or are thinking of moving your sporting career or life to Spain, please do not hesitate to get in touch.  rpe@solsportsmanagement.com   /  +34 644 956 495